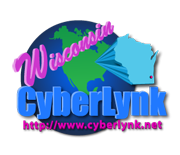 1995 CyberLynk was started in September of 1995 in Racine, Wisconsin as an Internet Service Provider offering Dialup, ISDN and T1 Internet services along with Windows website & email hosting services. As the popularity of the Internet grew so did CyberLynk while expanding its network to Milwaukee, Kenosha and Chicago. Providing high quality Internet services to local businesses in Southeastern Wisconsin and Northern Illinois, CyberLynk grew its sales force and opened its first office in early 1996.

During 1997 and 1998 CyberLynk dominated the local business Internet market for high speed Internet access and website hosting services. CyberLynk started to provide free email hosting services to local customers to gain market share and give back to the community. As technology developed CyberLynk upgraded its network backbone with high end Cisco routers and its dialup infrastructure to support the new 56K V.90 modem standard.

1999 While dominating the business Internet market, CyberLynk continues with its growth plans and expands its presence in Chicago and Northern Illinois. CyberLynk also adds DSL Internet service to its portfolio of services for both residential and business customers. 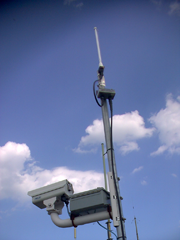 2000 CyberLynk deploys the first Fixed Wireless Broadband network in Southeastern Wisconsin in July 2000 and holds a seminar to introduce this new service to the market place. Growing at the speed of light CyberLynk expanded its wired DSL, ISDN and Dial-Up Internet service to Burlington & West Bend along with expanding our Broadband Wireless service to Raymond (Racine), Gurnee (Illinois) and downtown Racine

In May 2001 CyberLynk is faced with its wholesale DSL provider @Link filing for bankruptcy and shutting its entire network down without notice leaving hundreds of residential and business customers without Internet service. CyberLynk converts most of them to its Broadband Wireless Internet network. This marks a turning point for CyberLynk that will determine its future success and ensure confidence in our customers. CyberLynk vows to never be held hostage by a single provider and continues to build out the Broadband Wireless Network.

2002 CyberLynk starts 2002 with deploying a new website and a revised logo that will stand the test of time. Continuing with the network upgrades and expansion plans CyberLynk completes the installation of its sixth Broadband Wireless Tower in Kenosha (WI), seventh in Hartland (WI) and eighth in north west Milwaukee (WI). In an effort to grow beyond the local market CyberLynk launches nationwide dialup and ISDN service.

Due to increasing spam & virus complaints from customers CyberLynk launches its own Spam & Virus Filtering service. CyberLynk continues to expand its wired/wireless network and customer base. CyberLynk is also adding employees to support its growth rate and moves its corporate offices to a larger facility in Franklin Wisconsin. 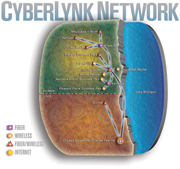 2004 CyberLynk is now maintaining a fully redundant wired and wireless network throughout Southeastern Wisconsin and Northern Illinois. As part of our commitment to the community CyberLynk starts to deploy free public wireless hotspots throughout southeastern Wisconsin at locations like South Hill Country Club, Odyssey Restaurant, Racine Public Library and the Wisconsin Department of Tourism rest area in Kenosha.

Utilizing our redundant network and additional network capacity CyberLynk successfully launches a Hosted VOIP phone system service. Business customers no longer have to worry about maintenance of their traditional wall mounted phone system and CyberLynk continues its mission to be that one stop provider that can handle all of your Internet related needs.

2005 Turning 10 years old is a huge milestone for any Internet company and CyberLynk proves it has what it takes to survive the Dot Com boom while it continues to grow. CyberLynk re-launches both Offsite Data Backup and our Spam & Virus Filtering services to better serve our customers. Acquisitions of Hostess Web Hosting and UnlimitedFTPusers.com start the trend of acquiring smaller hosting companies as part of CyberLynk’s growth strategy.

2008 Due to CyberLynk’s growth another datacenter build out within our Franklin Headquarters building is started. Actively seeking smaller hosting companies to acquire CyberLynk goes into acquisition mode and takes over ftphosting.com, interAdvantage.com, doreo.com and tbhost.com.

Construction for our newest datacenter is set to be completed the middle of 2009 and ready for customers by the beginning of 2010.

2010 While celebrating our 15th Anniversary CyberLynk works to finish construction on its newest datacenter build out. MilwaukeeColo.com is launched and becomes our portal colocation and disaster recovery purposes. With the datacenter nearing completion MacMiniVault.com is launched which will provide Mac Mini Colocation services.

2011 CyberLynk launches CyberLynkAcquisitions.com and positions itself to quickly acquire and migrate new acquisitions. A total of six hosting companies are acquired in 2011. Customers from PrefectPresence.com, UmbraHosting.com, CheckOutServer.net, VGThosting.com, TheHostGenie.com and BrataHosting.com have been migrated to new hardware within CyberLynk’s Franklin (Milwaukee) datacenter. 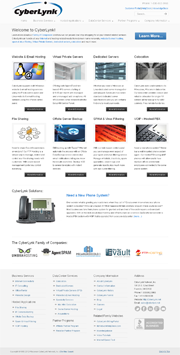 2012 CyberLynk starts 2012 with five acquisitions that include StopTimeStudio.com Customers, YellowDandelions.com, GlobalInternet.net, MakoSolutions.com and MonteCarloHosting.net. Due to acquiring over twenty hosting companies, CyberLynk works to consolidate hosting brands and move forward with the consolidation under a Family of Companies umbrella and re-launches the CyberLynk.net website.

2013 CyberLynk launches FreePBXhosting.com and becomes the only Approved FreePBX hosting company. Two hosting companies were acquired in 2013. Customers from Re:think and NeoSurge.com have been migrated to new hardware within CyberLynk’s Franklin (Milwaukee) datacenter.

2014 CyberLynk starts 2014 with the addition of a second Datacenter in Phoenix , Arizona. FreePBXhosting.com and MacMiniVault.com sales explode with addition of second datacenter and expanded hosting offerings.

2015 CyberLynk celebrates 20 years in business and announces that it will discontinue Dialup/ISDN Internet Service. Customers from gNetworks have been migrated to new hardware within CyberLynk’s Franklin (Milwaukee) datacenter. With the hosted phone system market place ramping up CyberLynk launches PBXactHosting.com to further extend its service offering.

2016 Another two hosting companies were acquired in 2016. Hosting customers from CreaTech and Lanex have been migrated to new hardware within CyberLynk’s Franklin (Milwaukee) datacenter.

2017 MacMiniVault.com redefines Dedicated Mac mini & pro service offering and builds another four Mac pro cabinets. With the demand for hosted phone systems growing CyberLynk launches MangedPBXhosting.com to offer fully managed phone systems to customers that no longer want to maintain expensive proprietary systems in house. Due to growth CyberLynk gears up to add another sixty 48U cabinets with another datacenter expansion in late 2017. 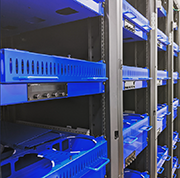 2019 Expansion of CyberLynk’s Milwaukee Datacenter (MKE1) continues as all of our hosting brands continue to show record growth. CyberLynk made strategic advances to grow IT Consulting revenues and hired Dylan Swirkowski to lead that segment of the business. CyberLynk acquires the hosting customers from Root Communications and they have been migrated to new hardware within CyberLynk’s Franklin (Milwaukee) datacenter.

2020 CyberLynk celebrates 25 years of business. In April, CyberLynk acquires Datacomm Plus and its employees to further grow the unmanaged and managed phone system base. CyberLynk acquires the hosting customers from Gravity Marketing and they have been migrated to new hardware within CyberLynk’s Franklin (Milwaukee) datacenter. More to come as we finish 2020 and moe into 2021!